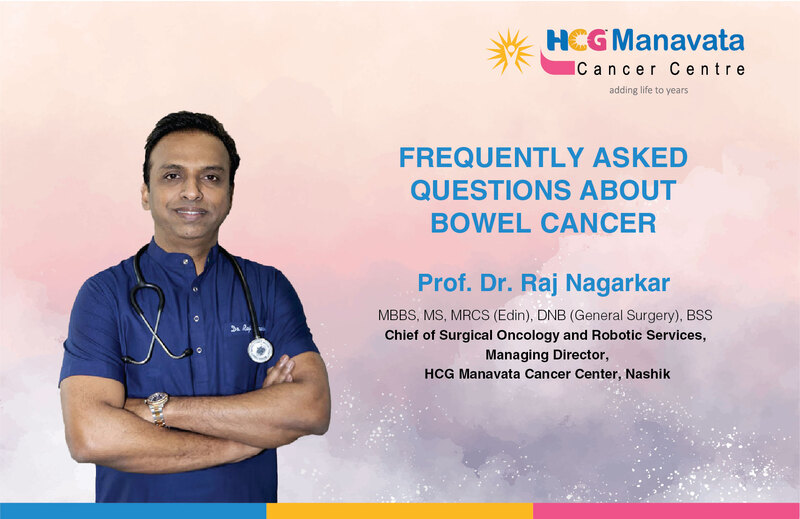 How common is bowel cancer?

How should I know if I am at increased risk for bowel cancer?

Several factors increase the risk of bowel cancer. These factors include age above 50 years, medical history of polyps or colorectal cancer, chronic inflammatory conditions, such as Crohn’s disease and ulcerative colitis, inherited diseases such as hereditary nonpolyposis colorectal cancer, diabetes and obesity, sedentary lifestyle, smoking and alcohol consumption, and treatment through radiation therapy for other cancer. If you have some of these risk factors, you are at increased risk for bowel cancer.

What are the symptoms of bowel cancer?

Symptoms of bowel cancer include presence of blood in the stool, changes in bowel habits, such as diarrhea or constipation, weakness or fatigue, unexplained weight loss, a feeling that the bowel is not emptying, abdominal discomfort, pain, flatulence, and very narrow stool.

How can diet changes reduce my risk of bowel cancer?

It is important to consider a healthy and balanced diet. For example, avoid eating a significant amount of cholesterol and fats. Further, incorporate sufficient fiber in the diet to prevent constipation. Maintaining a healthy weight also reduces the risk of bowel cancer.

I am diagnosed with the presence of polyps. What are polyps, and how can they increase the risk of developing bowel cancer?

Polyps are the non-cancerous growth in the lining of the bowel. The presence of polyps increases the risk of bowel cancer as some polyps transform into malignant forms. Further, external characteristics cannot differentiate cancerous polyps from non-cancerous polyps. Thus, they need to be removed for further analysis.

How can I prevent bowel cancer?

There is no method for absolute prevention of bowel cancer. However, you may reduce its risk through several measures, such as eating a healthy diet comprising grains, fruits, and vegetables, avoiding smoking and limiting alcohol consumption, living an active life, and maintaining a healthy weight.

What should I do if I am at increased risk for bowel cancer?

People at average risk should begin screening for bowel cancer at the age of 45. However, people at risk may start earlier than 45 years and may undergo specific tests, such as stool tests and colonoscopy.

What are the most common places where bowel spreads?

Once the bowel cancer cells break away from the tumor and travel through the blood of the lymphatic system, they may spread to any part of the body. However, the common places to which bowel cancer spreads include the lungs and liver, brain, peritoneum, and distant lymph nodes.

What are the various stages of bowel cancer?

Staging of bowel cancer determines the severity and assists the oncologists in determining treatment strategy. The stage of bowel cancer initiates from 0 (earliest stage) and goes through stage I to stage IV.

How does the doctor diagnose bowel cancer?

What are the chances of survival if a person is diagnosed with bowel cancer?

The survival rates depend upon several factors, including the type of bowel cancer, the stage of the disease, and the response to treatment. The 5-year survival rate is 91% in localized, 72% in regional, and 14% in distant bowel cancer.

What are the causes of blood in stool other than bowel cancer?

What are the treatment options for bowel cancer?

The treatment strategy depends upon the stage of disease, the age of patients, and overall health. Some treatment options for bowel cancer include surgery, chemotherapy, targeted therapy, immunotherapy, and radiation therapy. Undergoing the best bowel cancer treatment in Nashik also improves survival.

How should I conserve energy during or after the treatment of bowel cancer?

Fatigue is common in cancer and during its treatment. Therefore, it is important to conserve energy through a healthy diet, follow an optimum routine while scheduling rest in between and managing stress, and practice relaxation techniques.

What are the side effects of chemotherapy?

Chemotherapy involves drugs that kill the rapidly dividing cells in the body. Thus, apart from cancerous cells, chemotherapy also attacks healthy cells. As a result, chemotherapy has several side effects, such as nausea and vomiting, fatigue, infection, hair loss, constipation, change in appetite, and easy bruising and bleeding.